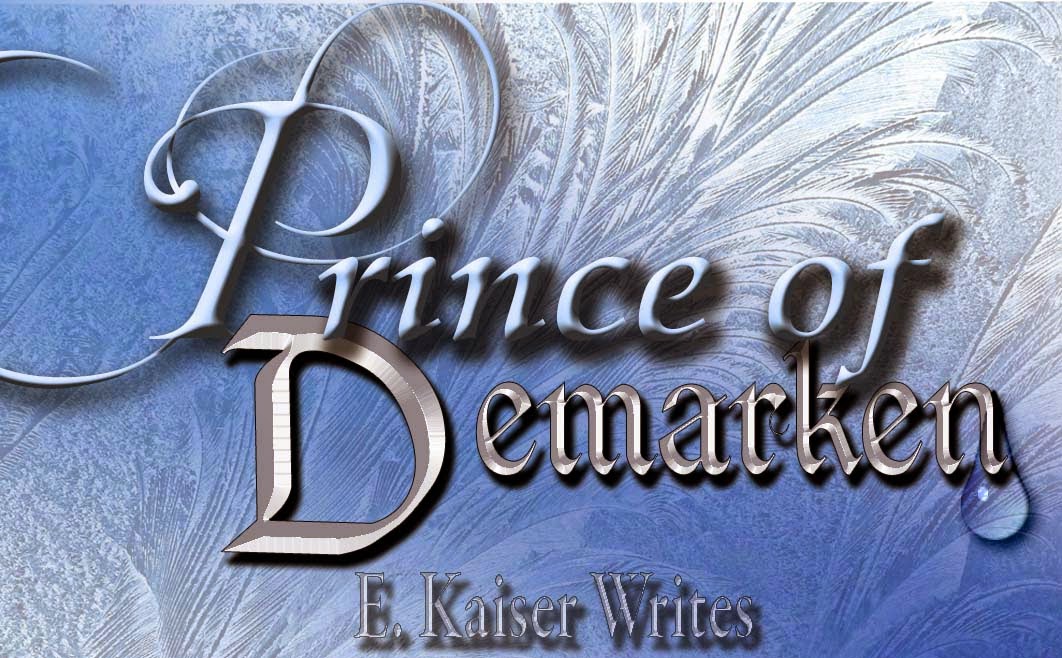 July is almost over. I mean, like almost OVERRRRRR...  for which I am actually really happy. I know, I'm supposed to be shocked and surprised at how fast time is flying, but instead I'm kind of
like; "YES!!! Come on, come on! I can't wait to get to the end of this tunnel!"

Which speaks of my belief that the best is yet to come, I guess? ;-)

Either way, I'm happy to report to you all that this month I did indeed make my 20k Camp NaNo goal... in fact I did better than that and wrote a total of 31,740 words.

Which is a great!

...Even though not all of it was on the particular ms. I wanted to wrap up this month.
(Should I be learning something here, do you think? My "wrap this up" goals never seem to work in monthly segments, methinks.)

Anyway, back to the subject.
I wanted to finish off the first draft of Prince of Demarken, and since I already had nearly 40k on it I thought that should have been a do-able task. Unfortunately, it appears that the "easy part" had been the first 40k, and the rest of this is proving more dicey.
You see, in the first part of Demarken, our boy faces some major musical overtures in his home country, having caused great distress to his kingdom and his family, (political/ diplomatic, as well as personal reactions all having a heyday.)
So, he's in serious hot water, and because of stuff that happened in Winter Queen, he's not handling any of that very well.
So it's a real, royal mess of a familial stress event, and it's a bit tricky to chart the course correctly.

One of the snags I hit upon this month was his brother's personalities. His oldest brother, (by over 2 decades) is the current king, and it goes from there. Having a large family, (boy, am I a sucker for this or what?) makes for interesting situations, but getting everyone to have a distinctive personality, and knowing them well, is crucial for having the key players be unique enough to add spice to the story, not glop it all up.
This is of course a tricky proposition, but something I know can be handled well. And I think it's important to have literary representation of genuine family relations... since authors so often go with the cop-out of "the Orphan!!!" ;-)

So, in order to understand how his brothers act now, I had to go and write some scenes of them in their younger years.... when they were the main players in Twelve Dark Knights. Yep, about 15 years ago.

It's amazing how much info you can get from a younger form of a character... and let me tell you red headed, green eyed Helje is quite the kid! He's complicated and somewhat embarrassing in a manner so authentic you can't help but feel sorry for the fella. His twin Morten is so much better equiped to take on the world, even at eleven. But the special relationship between the two is super endearing, and I can't wait to see where they go a little later in their lives.

Anyway, so I wrote these particular pieces in Demarken by flipping back and writing a scene for Knights, then a current scene from Demarken, back to Knights, back to Demarken.... this kept the characters on pitch with themselves and made the whole world of the family crystalize into clarity.
It was pretty amazing to see how much the brothers were shaped together in Twelve Dark Knights, and it's kind of a little bit sad that our boy missed out on lots of that because he was the littlest by such a large margin.

But the family dynamics are really resonating through the series, and I'm very excited to listen to them hum.

So although Prince of Demarken won't be wrapped up here this July, I do now have several thousand on Twelve Dark Knights, which has me super excited to get to that stage when the slot comes up!

And Prince of Demarken currently stands at a little over 57k, so we're definitely closer than we were before! :-)
But there's still a whole lot of story left to go.


What'cha think? Will I ever be able to correctly predict my word counts? Or the time needed to finish something? ;-)
Posted by E. KaIser Writes at 12:39 PM 2 comments:

Hey! I'm a featured guest poster recently over at Vaguely Circular's Imagine This! celebration of
creativity.
I maybe should have given everyone a bit more notice, but it just snuck up on me!

In other news, I'm over 20k on my July writing, so that means I've reached my Camp NaNo goal. Should I reset my official goal to 30k, or just keep that as an unofficial goal?
What say you all?

"It seems a lot of ideas come from dreams, and I have a theory that dreams and spec-fic actually are located in the same place… as in, spec-fic is stories set entirely in the dream world, that is why they work, and why they appeal.
Because we are waking when we read them, our conscious minds demand the stories follow their own internal logic and rules (unlike dreams); but, so long as they’re consistent, writers can get away with anything… because we all know in dreams, anything goes.
I’m known for active and colorful dreams, and there was a stretch..."

Go check the rest out on Vaguely Circular!
Posted by E. KaIser Writes at 1:48 PM 5 comments:

Title Image for the Thaw series

What do you think of this as a title promo image to kind of sum up the whole Thaw series?

It is visually linked to the first four covers... and I like the way the water drops and the silver metal-look letters play off each other. 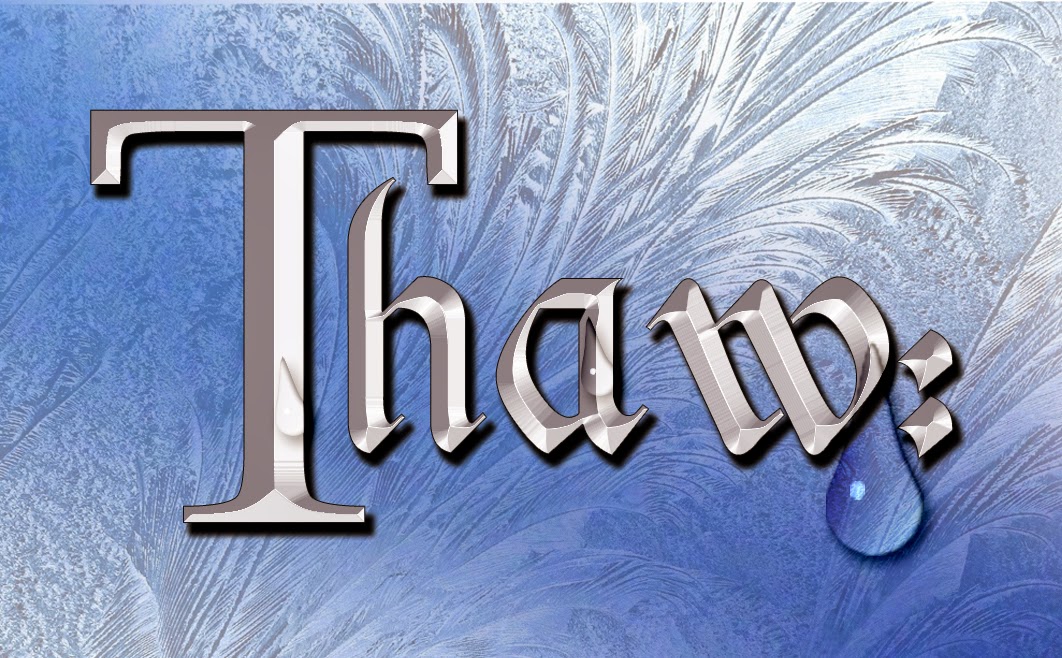 Tell me your thoughts!!!

Winter Queen is Wrapped!!! (At least for now!)

Winter Queen is wrapped up!
I really do believe I've gotten everything I can think of that needs to be in it... put there! Now to do a
bit more tweaking and then we'll be looking to see what we get as feedback from it!
It goes without saying that I'm very relieved to be done with that manuscript... but I do wish I'd managed to finish still in June.

This means that I needed part of July to finish WQ... unlike I had hoped.... But, since it's finally over, I can now feel free to move on to the sequel.

Only on slight problem... I'm feeling a wee bit drained. (Ack!!!)
And since it's Camp NaNo, the pressure is a bit on.

I've set my NaNo goal at the same monthly goal I've been doing, 20k... so it really shouldn't be that scary. But the NaNo stat bar dictates a proscribed number of words Per Day... which you all know is not how I work best.

So that is a little bit scary to me.

And you know I don't work well when frightened.


Anyway, I've been tapping away at my July NaNo doc, and I've gotten 6,583 words so far. Which puts me above the curve needed to make my stats approve of me... but I'm not feeling energized and refreshed like I'd like!

I am having really outlandish dreams, though, which usually is a sign of creative muscle that just begs to work! So what I need to figure out is how to connect the two wires and get the creativity to boiling on Prince of Demarken!!!


P.S. What do you think of our working cover???