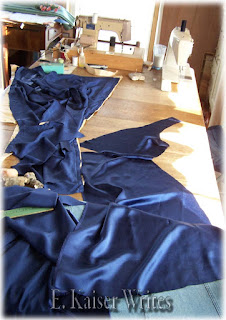 We are hard at work on the Faux-Burgundian, though it begins to look like it'll be more of an "old German" gown... and it's slower going working with the slippier fabric.

I have finished off the chemise for underneath it, which I used as a "muslin" and made the pattern-test first on that! It's turned out really nice, and lead the way so nicely... but the change in fabric has necessitated a few differences in getting this over-gown done.

This is the basic shape laid out as we were sewing it together...
(Tip: paper under your pressure foot is a must! And a layer on top is even better, so keep the stuff from slipping into a wrinkly seam. We learn as we go! ) 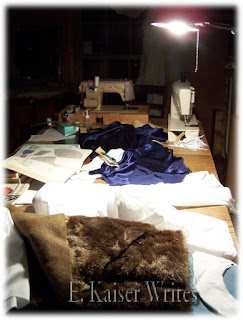 Many late nights have been involved, you can bet on that!!!


The "hand" is really gorgeous on this fabric, though. My very first foray into sewing with actual silk. (From Dharma Trading.)

I've found that sometimes it's faster to just hand-stitch something rather than fight the slippery through the machine. So I'm developing a technique for when to sandwich with paper and when to iron in place and stitch by hand! 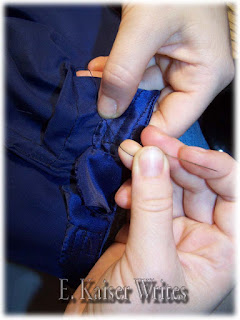 In all, I'm really loving the look of the over-gown, and I think this is really going to come together nicely. But it is taking longer than I'd hoped... but new things often do!!!

On the up side, we've figured out ways to re-use the piece multiple times, and will be having the sleeves as an "add one" piece instead of firmly attached. This will allow us to go with a lot of different looks while using this one main gown, and should help in the long run with our completion schedule!!
#6costumes2months And we're already into our second month now!!!


So, as a wrap up on the previous post, with the embroidery question, the horse definitely won out on the votes!
So we will be going with a horse on the other sleeve, (though I may change the look of that horse) And Perhaps, to keep the pattern from looking imbalanced, we should add a little more detail in other areas, so there's not this open scroll-work, and then pop, tight detail only in the middle.
I'll be thinking about that!

Many thanks for helping out by sharing your opinions, everyone! It really took a load off my already frazzled mind!