Okay!
Well that was very down to the wire, but I've finished up my monthly goal of 20k for May just right now.
So that's a great feeling!!!

Want to know what's even greater?

I have the urge to keep going on this scene that came to mind as I desperately needed one to finish out my word count for the month! 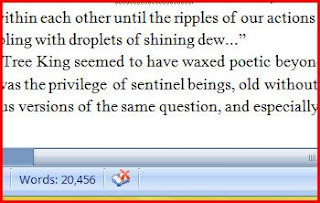 That's one of the wonderful things about having a monthly goal, for me it allows a lot of flexibility within the month, but if assures that at least at some point, I will have to really push myself beyond the "comfort zone" of writing only when and if I totally, completely am inspired.
And sometimes in those "reach zones" there is real treasure to be found!

This scene is a perfect example... I had not thought to have the Tree King show up in the #4 Thaw book, but suddenly here he is and he's answering a lot of questions that have been sort of floating around all through this series so far. The profundity of his replies are setting up a whole slew of information, further enriching the world for this series to go forward in, and laying a foundational hints at some of the things that are to come.
Though Ilise is totally oblivious to the clues... I think readers who read this series twice will catch a whole ton of suggestion here!!!

I love moments like this. Gifts from the pinch-points, so to speak.


What goal have you finished this month?
Do you have a long range goal you're working on?

You all take care!
Elizabeth
Posted by E. KaIser Writes at 4:39 PM 3 comments:


Hey! Today we have with us indie author Faith Blum, stopping by on her release tour for her latest book, Amazing Grace, number 3 in the Hymns of the West series.

E; Okay! So when writing a series like this, at what point in the process did  you get the idea of this book's plot?

F; When I started writing "Be Thou My Vision". I was writing it in first person and Caleb's character started to grow on me and I wanted to write more about him than I could in the first person account of Anna, Caleb's sister. So, I started coming up with a rough plot idea for "Amazing Grace" and the plot grew as I wrote it.

E; So you don't necessarily have things planned before you begin a particular book?

F; In that case, no. When I started writing "A Mighty Fortress", I wasn't even thinking about doing a series. Then one of my beta-readers asked what book two was about. I told him I didn't have a book two, but my brain kind of took off from there. The original idea I had for book two ended up being book five now because I kept coming up with idea after idea after idea. All of which had to come before book five.

F; No, it hasn't been. It's also a mystery and slightly intimidating, so I may have procrastinated on it slightly. Not much, but a little. Although, with the new idea I have for the mystery part, the procrastination was a good thing.

E; And where in the process did this current book's idea come up?

F; Which one? Amazing Grace or book five?

E; The one you're releasing now, Amazing Grace.

F; I think that happened while I was writing "Be Thou My Vision" and wanted to do more of Caleb's side of the story.

E; So how much of a plan did you have when you started writing Amazing Grace, and how much of it occurred to you as you wrote?

F; I knew the story would be about Caleb and his mail order bride and have a lot of Caleb's father in it. That's about all the planning I had. The rest came as I wrote it.

E; So you're a certified "fly by the seat of your pants"-ter, hm?

F; Sometimes. I sometimes plan it out more. But then, even if I have a plan, my characters sometimes change things on me. Quite a bit. With book four, the one I'm currently writing, I had a rough outline for the last few chapters, but a new character crept in and kind of inserted herself into the story. I think it was a very good thing, but I hadn't planned it originally.

E; So how did you come up with the theme of naming the books after songs? And what made you choose these certain ones?

F; As I edited "A Mighty Fortress", I realized my characters sang or quoted the hymn a lot. So that title was born. "Be Thou My Vision" has Irish roots as do Anna and Caleb Stuart, so Anna's story was naturally that hymn. "Amazing Grace" is one of my favorite hymns and really fit the story or grace and redemption that I weave into "Amazing Grace". And of course, all of the hymns I pick would have actually been around during that time period.

E; Started out very organically, then. That's terrific! I love it when a title comes easily. Yes, the historical aspect to them is wonderful. So have you decided what the one you're writing now will be called?

F; Yes, I have and that was the hardest one so far. I was originally going to name it "Come Thou Fount", but that didn't fit as well as I wanted to. Then when I was picking music one day for church, I decided I wanted to sing "The Lily of the Valley". As I read the words, I knew I had to look and see if that hymn could possibly work as a novel title. It did! And the best part is that it is based off of Song of Solomon which is where I plan to quote from at the beginning of my novel. So, the short answer is yes. Book four's title is "Lily of the Valley".

E; Beautiful title for Book 4!! These are all set in the American West during the 1870s. Having grown up in several different parts of that West, there's a wide range of area... "the West" is a huge region! What particular place have you set these, and why did you choose that route? Also, was there research to be done, or were you already familiar with the territory?

F;  Book one was set in Illinois, Wyoming, and Montana. Books two and three are set in Tennessee and book four is back in Montana. I chose Montana because I've always wanted to go there. I chose Tennessee because it worked well for the story. I didn't do much research of any of the places, just enough to put in a few descriptions. And I am not familiar with any of the places.

E;  Well, you know, Wisconsin in the "old days" was considered the West for a long time there. Have you ever thought of setting something in that area?

F; That's true. I haven't. Book six might end up being in Chicago, though. So that's close to Wisconsin!

E; So what was the most fun part of writing something set in the west, as an author? The thing you just loved the most that another setting wouldn't have given you as much rein on?

F; Being able to live vicariously through my characters as they travel the West.  Plus there was so much that happened in the Old West that it isn't as strict as say, the Regency era.

E; So, if there was one thing you'd like strangers to know about you from reading this book, what do you think it would be?

F; That it is only by God's grace that any of us are on this earth or that I was even able to write and publish this book!

Caleb hurried to the post office. He had to get in and out before his sister finished at the general store. “Any mail for the Stuarts?” he asked the postmaster.
The postmaster took a lazy look at him over the top of his eyeglasses and gave a heaving sigh as he turned around to check. “Yep. Somethin’ from Ohio and somethin’ from Montana.”
Tapping his foot, Caleb waited until the large man put the letters lazily in his hand. As he left he wondered why Anna had written someone in Montana and who she knew in Montana. It was really none of his business, but he was still curious. He folded the Ohio letter in half and stashed it in his back pocket. It would get wrinkled, but at least Anna wouldn’t know about it.

As Caleb struggles through some inner battles, he secretly starts a correspondence with a widow and her daughter. Their unabashed faith in God convicts him and increases his inner struggles.

Unable to find a steady job, Maggie places an advertisement to become a mail-order bride. Her daughter, Rachel, is her motivation and encouragement, but if Maggie doesn’t find a job or husband soon, Rachel might not survive through the next year.

Can Caleb learn to trust God despite his past? Can Maggie and Rachel hold onto their faith despite all their trials? What will happen when they meet in person?

About the Author
An avid reader, Faith Blum started writing at an early age. Whether it was a story about the camping trip that summer or a more creative story about fictional characters, she has always enjoyed writing. When not writing, Miss Blum enjoys reading, crafting, playing piano, Captaining on the Holy Worlds Historical Fiction Forum and playing games with her family (canasta, anyone?). 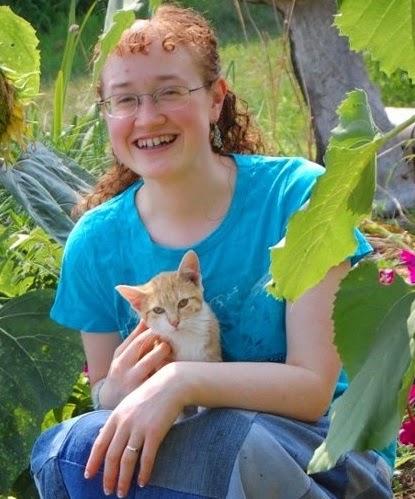 As a history enthusiast who has been fascinated for years with the Old West, Faith has endeavored to create a clean, fun, and challenging Western story. Faith lives with her family on a hobby farm in the Northern Midwest, where she enjoys the many cats they have.
You can find Faith on her Website, Blog, Facebook, and Twitter.