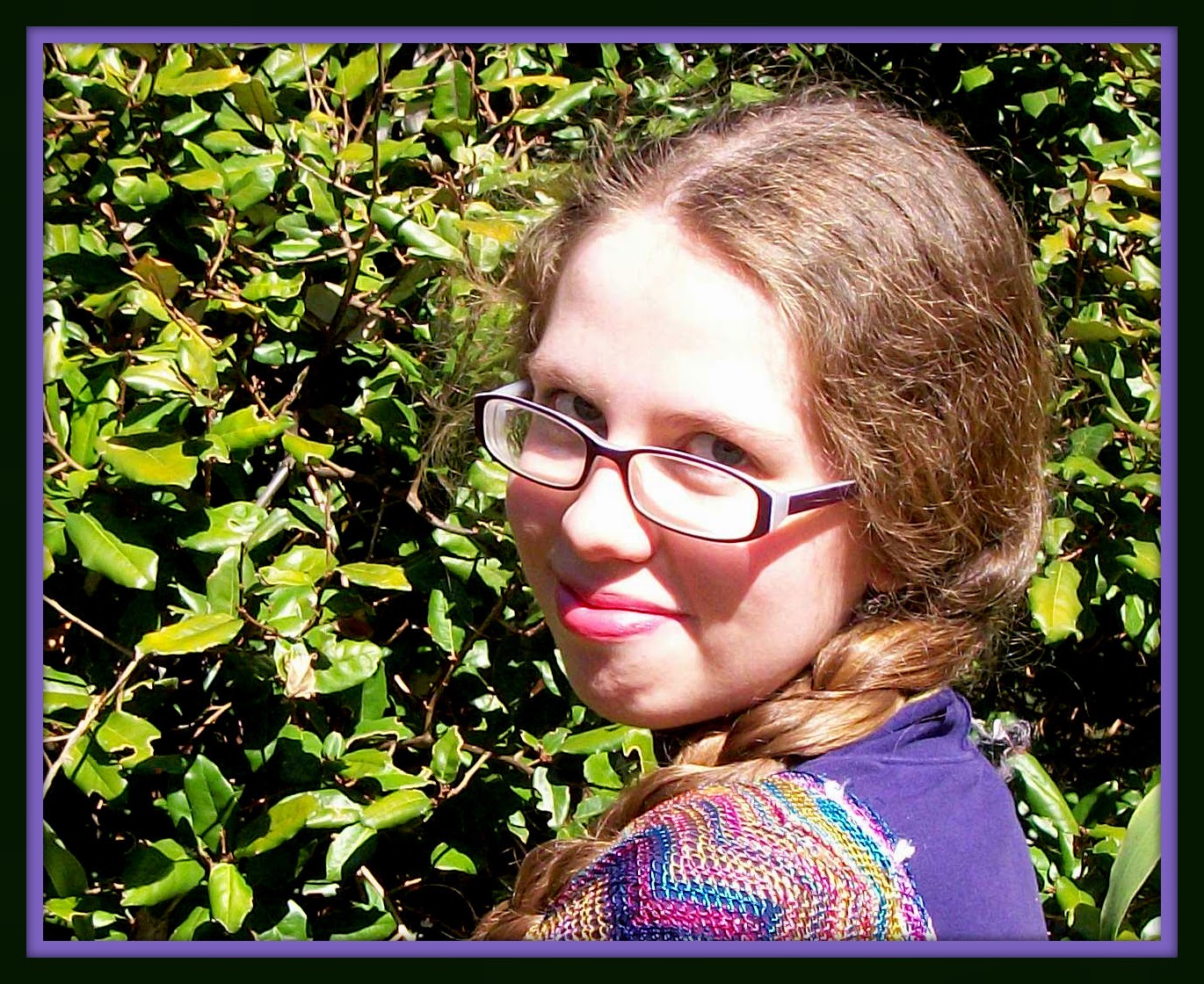 Today we have with us a fellow "fairy-tale re-teller" of a writer, Kendra E. Ardnek. She hails from Texas, and is bringing out her sixth release, My Kingdom For A Quest, set in her world of Bookania.

E: What draws you to writing with "mix and match fairytale" elements instead of inventing everything from scratch? Why is this more fun?
K: I won't say it's more fun, since I do love building the plots in my original worlds as well. However, I've always loved fairy tales, I grew up listening to my mother's renditions of them (and she's an amazing storyteller). I believe the first book I ever wrote was a retelling of the ugly duckling, and somewhere in my desk I have a retelling of Rumplestilskin and a Paul Bunyan story.

I love the challenge that comes with retelling fairy tales. How can I make this story mine and work it into the mythos of the Bookania that I've created? Some of the fairy tales have been difficult, but it's always so rewarding when I realize where the story belongs, and everything clicks into place and is perfect. I especially love drawing on the more obscure tales, such as "Casperl and the Princess," bringing them to light and giving them some time in the sun.
E: What do you think gives the fairy-tales that have come down through the generations to us such a lasting quality? Why do you think they are still around, when in each decade more and different writers are all adding to the huge literary tradition that is available in the English language?
K: I'm not entirely certain. Many fairy tales, such as Cinderella, have existed in some form or fashion for millennia, perhaps predating even the flood. There's a timelessness to the messages that many carry, and an ease with which most can be told.
As for why they're still popular today, despite the inundation of so much modern literature? Actually, I think Disney might be to blame for that. Snow White was the first movie they ever made, and ten years later, they followed with Cinderella, in an attempt to produce something to help pull them out of financial difficulties following the second world war. After taking thirty years off from animated films, they chose to return with The Little Mermaid. As much as you and I may complain about how much Disney changed our beloved tales, they've made sure that they're a huge part of every little girl's childhood.
E: True! Good point... that is an interesting angle in itself. What makes fairytale retellings such good bets for Disney, as well, then, hm? Hahah! One question just leads to another!
Once you start with this style of story, will there ever be a time when you "run out" of material? Or is the heap of resources so inexhaustible that you can only foresee yourself quitting by saying "I'm Stopping!!!"?
K: I have a notebook that contains the titles of 21 volumes for the Bookania Quests, and I have untitled plots and stories set beyond that point. The only way I foresee myself quitting this series is dying.

There are just so many great fairy tales, many of which I know for certain where they go, others that I only have a vague idea or no clue at all. My personal repertoire of fairy tales that I know off the top of my head is somewhere over a hundred, with multiple versions of many of those tales. I'm also working in legends, such as Robin Hood, and myths such as King Arthur and the Odyssey. I even have a few Shakespearean plays scheduled to make their appearances.
Unless you limit yourself to just the "popular" fairy tales, this isn't something you're going to run out of any time soon.
E: I agree with you! And have the same "problem" myself... I'd like to be finished with this series, but the 18 plotted tales (only 3 released!) make for a daunting pile to see the bottom of! Though, I suppose other things can be done in the "interim" between writing these...
So, what do you think can be learned from fairy-tales, and/or their retellings?
K: Literature in general is a study of people's beliefs. You can learn about the values of the Greeks by reading their mythologies, the middle east by perusing the Arabian Nights, and Fairy Tales are no different. The modern retellings are no different.
And by taking them in as a whole, we can see that, as a race, at our core, humans have changed very little. We love and hate, we seek glory and knowledge, and above all, we have a fascination with that which is beyond the natural world. We all still love a good story.
E: Do you feel that you include Christian themes in your tales, and how does that show up? Don't be afraid to give us examples!

K: Had you asked me this question three years ago following the publication of the first book, I would have shrugged slightly and admitted that there wasn't very much in there. Now, with the third book of the series (and my sixth book all told), my answer is a strong yes. In Bookania, God is called the Author. For the past hundred years, however, most of the royalty and nobility have turned their backs on him. It's interesting writing their return to faith.

E: Ah, that can be a tricky road to trace out... Here's wishing you success!
Thanks for joining us and sharing some of your methods with us!

Back Cover: Arthur is the rightful king of Briton, but his Uncle Mordreth refuses to give up the regency. Arthur and Grandfather are now returning with allies to wrestle the kingdom from his uncle's grasp. But not all is as it seems among his allies, and everyone has secrets. New loves, old loves, lost loves, kingdoms conquered and kingdoms stolen. Who is the real "rightful heir" and will the nearly forgotten sword in the stone finally answer this question?

My Kingdom For A Quest can be seen on Goodreads;
is available on Kindle,
in print as a Paperback.

Snippet
“Only twelve hours! Leo, there is no way to escape Briton Dungeons. No way!”
“That’s what they said in the dungeons of Fronce, too,” said Leo absentmindedly, taking a sip of his gruel. “Now be quiet while I think. And eat up. We’re going to need our strength!”
“Dungeons in Fronce!” Gavin squeaked.
“Yes, now those were dungeons! Now be quiet.”
Gavin fell silent and simply stared in the direction of his friend, the look on his face (had it been visible in that dark cell) a mixture of confusion, awe, and horror.
“You wouldn’t have happened to have fallen in love with any young lady who would be able to arrange for a soldier to play traitor and get us out of here, now would you?” Leo suddenly asked.
“No…”
“Ah, well, I suppose that not every young lady can be so obliging. And now that I think about it, it’s as good a way into the dungeon as out. Now where was I … No, bribing the guards is out of the question. All we have is gruel to call our own, and I’m sure they have much better food in the soldier’s quarters.”
“We’ll never get out of here!” Gavin moaned.
“That’s what you think. That’s what everyone thinks,” said Leo. “But I tell you, there’s a way out of every sticky situation. You just have to be observant and look for it.” Leo frowned as he set his now-empty bowl to the side. “It’s too bad Mordreth doesn’t have any daughters for us to charm. Only that good-for-nothing , and I really don’t see him helping. And Arthur’s gone, so that’s out of the question.”
“If Prince Arthur was here,” said Gavin, “we wouldn’t be in the dungeon.”
“Good point,” said Leo. “As I was saying, we could always try to steal a key and unlock the door, but that can be a very tricky business, and it’s very easy to get caught. And then where would we be? Probably talking about death sentences some more. Honestly, they don’t bother me, just all this talk about them. It’s enough to drive a man mad.”

Sew, It's a Quest (The Bookania Quests Book 1)

Do You Take This Quest? (The Bookania Quests Book 2)

The Woodcutter Quince and Other Stories

Saffron's Big Plan and Other Stories

Check out the other stops on this Tour!

Author: Kendra E. Ardnek loves fairy tales and twisting them in new and exciting ways.  She's been practicing her skills on her dozen plus cousins and siblings for years, "Finish your story, Kendra", is frequently heard at family gatherings.  Her sole life goal has always been to grow up and be an author of fantasy and children's tales that also glorify God and his Word. You can read more about her on her blog, knittedbygodsplan.blogspot.com.