Welcome to the next stop on the Independent Christian Authors Blog Train! 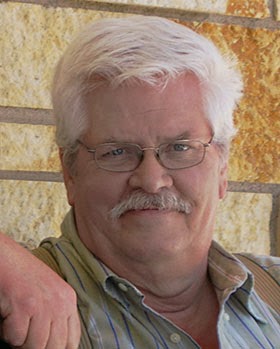 I'll begin the "linked blogs" on this train by interviewing fellow indie author, David Bergsland. We both belong to the online group
ICA and connected through there... a great place to learn from the many experienced members on there who happily share of themselves, and David is right in among those!

So I am glad for a chance to introduce him to you all, and hope others will be encouraged, blessed,  and perhaps even challenged by his story!
If you're a writer looking for a warm, helpful place, I'd highly recommend joining ICA on Facebook here.

We'd welcome the chance to get to know you!

So, David; what or who inspires you to write? Is there a “real person” you pattern either your protagonist or antagonist after?
It’s just part of who I am. I began as a scientist when I got out of high school in 1961. In full rebellion, I was one of the early flower children [pre-hippy] in the 60s. All the drugs gave me a strong desire for a creative outlet. I graduated from college with a fine art degree. 3 years later I met the Lord.
It became quite obvious that the Lord had no plan to bless my art career even though the desire was still there. He led me into graphic design, then art director, then teacher, font design, and finally dropped writing into my lap.
So, writing started as a ministry supporting my teaching of digital publishing. The state school I taught in [Albuquerque TVI] didn’t allow me to mention Jesus in my class or coursework, but He blessed my time there and I ministered to many students over the years.
My technical books on book design, using InDesign, font design, typography, so on are still what He blesses for me, primarily. When I was forced out of teaching [the school dropped the degree], I happened to be 65—so I “retired” early—accepting this as the time where the Lord would finally let me write for him. It’s a financial necessity for me to work at my trade. So, I began writing Christian books: Bible studies and creationist books. They’re beginning to sell, but they’re a small part of my income.
I also had two relatively complete novels almost completed. They were released as The Righteous Perish, a radical, edgy, non-conventional endtimes thriller patterned after what I knew as a prophecy teacher and Bible teacher for 40 years, and as an associate pastor supporting my wife’s ministry.
The 2nd novel was released as Daniel’s Mighty Men. It’s an epic technothriller with the heroes and heroines roughly fantasized out of people I know. It shows a privately owned black ops company made up of over the top, Charismatic/Pentecostal/Fundamentalist Christian warriors. It’s wonderful to read—but it’s a massive book, so it’s taking a while to get traction.
Where do you want to be in your writing career five years from now?
Serving Jesus in power, following His lead. I have no idea what His plans are.
What one piece of advice do you have for other authors?
We don’t need more entertainment. We need more books which the Lord can use to transform lives.
Which author, either living or dead, would you most like to meet?
The Apostles Paul & John
The prophet Isaiah
What book project/s are you working on right now?
An inspirational book on what it takes to be a Christian author with a strong call called Writing In Holiness: While Keeping It Real.
An epic fantasy about a world where political control is a fight between an apostate church and occultic evil. The true believers are being slaughtered by the church. The hero is a calligrapher/artist called by God to strengthen the true believers and the heroine is a princess running for her life from her brother who has sexually assaulted her physically and demonically. It’s the first book in a series called Staff of Light.
Plus new editions of my technical books on font design and book production for Christian self-publishers.
Author Links!
Amazon Author page: David Bergsland
My latest release is Designing ePUBs With InDesign. It’s the ebook production portions of my main book design offering Writing In InDesign CC 2014 Producing Books.
My books are in the iBooks Store, NookBooks, Kindle, Createspace, Kobo, Books-a-Million, Scribd, and many more.
Social Media:
FaceBook: https://www.facebook.com/radiqxpress
Pinterest: http://www.pinterest.com/radiqxpress/
Gumroad: https://gumroad.com/radiqxpress
Twitter [Christian]: @radiqxpress
Twitter [technical]: @davidbergsland
Google+: +DavidBergsland
Scribd: http://www.scribd.com/bergsland

My technical blog: The Skilled Workman focused on book production, font design, and typography for the Christian author http://bergsland.org

My normal email: david@radiqx.com
Thanks for joining us, David, and we look forward to seeing who you interview on your blog Sept. 2nd!
Posted by E. KaIser Writes at 2:00 AM 6 comments:


Well, the internet has done it again!
I am once again surprised by my own post.

Vaguely Circular is featuring my guest post today on the Mathematics of Speculative Fiction. You should take a look, and then tell me what you think of the theroy?
After all, who loves a good theory more than Spec-Fic lovers???!!!!