Despite the blizzard and resulting snowed-in-ness, we are definitely moving forward here at Hearth Books. We hope to have the print versions  of all five of my books so far finalized by the end of the month and available to the public!

We have received the initial print versions of all five released novels. Here's a pic of their lovely backs... 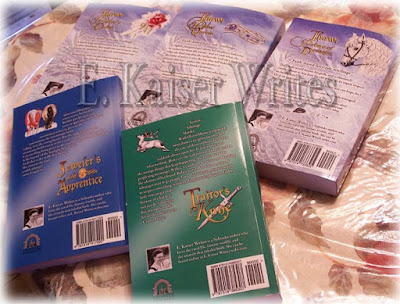 (We applied the same principles all you lovely people voted on for JA, so the series is turning out with a lovely "look" to it! )

We'd like to do a "New Cover Reveal" for the re-done cover on Traitor's Knife, as a mini-promo for all the print releases.
(So anyone with a blog who wants to be involved with that please contact me! :-) )


On to the main subject!
We need to finalize the back cover copy for both Jeweler's Apprentice and Traitor's Knife.

Here's what we've got so far:

After stumbling upon a court secret, bookish Fia Brithin quickly gets sent mountain jewelers to prevent the information she unwittingly holds falling  into the wrong hands. But she soon finds that the mountains hold secrets of their own, and more questions rise.
Can anything bring peace to the neighboring war torn kingdom?
Is the legend  of the Sunlight Stone true?
And what is the stable boy hiding?
The answers she finds could endanger entire kingdoms.

On her first visit to the King Hanor's palace, 16 year old Fia Brithin stumbles into a court intrigue. To keep the secret safe, the Chancelor sends her off as apprentice to a famous, and reclusive, high mountain jeweler....And straight into adventure.Discovering gems with deep secrets and new friends with the same, Fia learns a whole lot more than just modeling wax. When to trust a stranger, and when not to; why not to try stealing from gem thieves; what heroism is, what royalty ought to be, and that the mountains themselves can sometimes be the greatest danger of all.

Secrets.
Sabotage.
Murder.
With Olayin House temporarily turned into a weapons factory, and the care of three orphaned children suddenly thrust upon her, Fia isn't quite sure what to think. However, she is determined to get used to the strange things that keep happening: the presence of the perplexing messenger Willex, a visit from her sister, and keeping the identity of her friend  Ilido a secret. But when a series of
sabotages start to ge people hurt, the young apprentice begins to suspect something  seriously dangerous is going on. Fia has little time to get to the bottom of what may not just be sabotages, but attempts on the life of the under-cover Crown Prince.

When the loyalist cause enlists the mountain house into a weaponry, apprentice Fia is confronted with three refugee children, a disturbingly upstart former messenger, and accidents happening everywhere. Are saboteurs out to nix the weapons works... or is it the incognito crown prince they're after?

Which is better? Which is most "alike" for a series feel?
Mix and Match and offer suggestions, because my brain is so fogged I can't decide anything!!!