Hey! It is my honor today to host Joel D Canfield on his blog tour for his new book, A Still, Small Voice.
It's always been fun to see what Joel has to say online, and I'm glad to have the opportunity to introduce him to some of you who perhaps haven't run across him yet!

So without further ado, here's Joel and he can speak for himself... 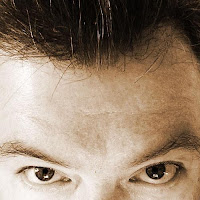 A Still, Small Voice in the Back of Your Head

JDC: The title of my latest book, A Still, Small Voice (Phil Brennan Mystery #2) is from something I heard as a kid: your conscience is a still, small voice that makes you feel still smaller.
I was raised on guilt, served both with meals and between them.

EKW: Phrased like a poet, Mr. Canfield! It's interesting, though how closely all that really is wrapped up in each other... we think of guilt as a bad thing, but without it completely there would be no conscience, and without that the world would be a terrible place indeed.
I guess it takes a lifetime to wrestle with those dichotomies!

JDC: As I approach 60, it's far too late to blame my books on my childhood...

EKW: Oh... go ahead. What's the writer's prerogative for, if not that?

JDC:  ...okay, I'm going to give it a try. Before a certain age our experiences land straight in our unconscious mind, unfiltered and unfettered, and our interpretations are sometimes (often?) skewed. Most of us, whatever our age, carry a dozen misbeliefs we formed in early childhood. We don't see them that way, though, as misbeliefs.
We think they're superpowers.
The things we "know" without logic (because we believed them so young) feel truer than many things we actually do know based on logic and reason. As a result they can feel magical, as if we have information others don't. It's not a conscious thought, but an unconscious feeling.
It's also the source of most of our really dumb decisions.

EKW:  I'm going to have to play witness for the prosecution here a bit, because yes, we can get hung up on childhood lessons that set up misbeliefs... but childhood is also where it is possible to learn the best true beliefs, too. Depends on what source our teaching came from... and of course there's an element of luck there, or if you prefer, guidance.
(Which I am extremely grateful for, in the end, the Lord has always turned things toward good for me, and I an very aware how easily I could be an entirely different person without His intervention in my formative years.)
But back to the subject, I definitely get what you're saying!

JDC: When others make choices we don't understand, it's easy to think they don't have all the information (or aren't very bright.) Usually, though, it's because their prefilter childhood beliefs are different from ours.

EKW:  True, that's our own human/natural instinct, because so often a person is inclined to just react without really thinking the big picture through.

JDC: And yes, that means everyone, all the time. Welcome to humanity.

EKW: I think that's definitely something that comes into play a lot in all the deepest sort of stories... whatever the genre. (Also a very INFJ thing to think about! All the deep things!)

JDC: It's also, according to writing teacher Lisa Cron in Story Genius, the source of the hero's actions in a good story. Every step of the way, they make choices based on their misbelief (which they still think is a superpower) until in the end they're forced, painfully, to confront it

JDC:  Since those misbeliefs are born early, usually before school age, they're almost always grown in the soil of family life.
In A Still, Small Voice you'll see Phil Brennan bumble his way through a non-mystery based almost entirely on his feelings about his father.
Why no, I'm not writing about myself. Not at all.

EKW: Haha!!! I think that's one of the scariest things, as a introspective writer who may be aware of the source we all pull our stories from... to show our fiction to the world definitely feels so scary because we fear the world will see us too clearly in that mirror. In actuality, I think most readers see less of the author and more of their own faces when they read... so authors can feel somewhat safer.
After all, a piece that really resonates is tapping into a universal (or close to it!) theme that most everyone finds a piece of themselves inside it.
Where can folks access to your versions of the universal theme, Joel?

JDC:  Folks who sign up for my newsletter get all my novels free, including A Still, Small Voice. Sign up. Download. Read. Quick and painless.
Before you go do that, though, why not grab a snack? Bake a pie, maybe. Or if that takes too long, make a sandwich. This one, perhaps.

I am a meat-eater. I'm also overweight (thank you, childhood stress) so I'm always looking for delicious food that's less bulky. This takes the gold in that category.
The first time I bit into this sandwich, I kid you not, I opened it back up to see if someone had put bacon on it while I had my back turned. Sometimes it's more a hint than overt flavor, but if you like a BLT, this does a great job of giving you the taste without the bacon. Of course, those of us who love bacon and aren't watching our weight should, in fact, pile on the bacon. I'm all for bacon. But this sandwich offers an alternative, because, y'know, choices.

Make two and have lunch with someone you love.


EKW:   Well, That's an interesting recipe, Joel. I think we all have a "perfect figure" in mind that we like to wish we were... though I've made peace with my inner critic (most of the time) and figure if I'm able to get through the day without too much pain than I'm luckier than a lot of folks, and should shut up and be grateful!!!
Of course, eating healthy should always be a priority, which for me actually means trying to make sure I get some meat in my diet, because I naturally prefer sweets and starches to proteins... pretty much all the time.
Which isn't ideal, because ... Balance!

(Post Scriptus: when it comes to sandwiches, I love my bread soggy! The more mayonnaise that can soak in the better, and tomato juice draining into the bread is just delicious!!!
Living in a wheat-free house for the past 15 years (for family members who have Celiac) makes me very appreciative of bread, and dreamy-eyed at the thought of tomato sandwiches!!! )

And the topic of maps and Greenland was just being discussed around the house the other day! So perfect timing on that subject!
Like I said, wheat-free house here, so that means slapping together some of my favorite things can be a challenge. Luckily for me, I found a recipe that combines sweets and starches into a creation that even gluten free can't pester, and it's a snap to concoct. Came upon it among Mom's exhaustive collection of gathered recipes, which I'd never seen used, and I've since kept it near and dear to my heart!

So! Taking all that into consideration, Impossible Pie is a great favorite with me.
Everything goes into a blender:
1 3/4 c. Cooked pumpkin (/squash/yams/carrots anything soft enough to squish to nothing in a blender.)
1 1/2 c. milk (of cream/ half and half/ whatever... you get the idea.)  {Somewhere in here I sometimes add up to two eggs, but I think I dock the milk back to 1 cup when I do that.}
1 Tb. oil/butter (or 2 Tb. because, guys, this is butter we're talking about!)
1/2 c. sugar  (this is probably a lot less sweet than a lot of people are used to, but for us, it's just nicely sweetened with very little guilt factor.)
1 tsp. cinnamon
1 tsp. nutmeg
1/2 tsp. ginger      (really, folks, just toss some pumpkin-y spices in, don't fret it. I like to throw Allspice in, 'cause it's basically an herb, and is good for you. When I do I leave the nutmeg out, because this isn't supposed to be a Pumpkin Pie SPICE pie.)
and last but not least, added after the others are all blended nicely,
1/2 c. flour with a dollop of
1/2 tsp. baking powder on top. Then hit that button again, on high, till smooth

And if I set a timer, I can generally get it back out of the oven before it gets too "browned"... though no one seems to complain about a black edge on a pie, anyway. They're so glad to see it in any condition!!!


What I love about this is it's so fluid. Don't have canned pumpkin on hand? Use something else that is remotely similar. It'll work out.
And yes, I suppose someone could argue that a recipe isn't supposed to be fluid... but, hey. I'm a creative. I like things that work out even when I swap things around.

Impossible Coconut Cream Pie is good too, but is a little more strict. You simply must have coconut, or it's not the same. (Google it! See if it's up your alley!!!)

Anyway, if you're not hungry by now, nothing can help you! Go get Joel's books and read until you feel ready to eat!!!

Thanks for being here, Mr. Canfield, and here's hoping you shed that pesky pound that's bothering you.
As always, keep writing! (It's good mental therapy!)
Posted by E. KaIser Writes at 10:55 PM

Thanks for hosting me today :)

Thanks for being here, it is always fun talking with a fellow INFJ!
Take care,
Elizabeth