All right!
Well, it's been a while, but here's my Realm Makers report. 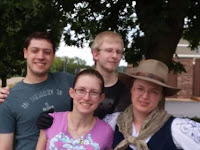 I was fortunate enough to travel up with long time online friend Mary, and her husband (both of them long time Realmies, so it was great to have 'veterans' as guides!) and one of Mary's long time real life friends; who had also been before.  So I was the only "Realmie newbie" in the car, and it felt like slow a transition into the conference started at the spot we met up and departed from!

The Chalet hotel it was held at did a great job of looking classic and Old World-ish, so that was a lot of fun. I'm usually not a fan of hotels, but this one felt more authentic than the 'post modern' type of stop-overs.

My roomies arrived a bit later than us, so I mingled with arriving attendees in the lobby; (which had such comfortable chairs! I loved that! ) While showing Space Kitties 2 to a brand new friend, I looked up from the author pic of H. L. Burke to see Heidi herself walking through the doors. That was kind of coincidental, and of course it was great to meet some Space Kitty authors in person.

There was also a lot of pilots coming and going on the shuttle from the airport all through the event, and I couldn't help but wonder where all those people who'd spent a night in the same hotel would be spending their next night... all over the world!

First nights in new places are usually hard for me to sleep through, and this was no exception. After discovering I'd left key items at home, panicking for a couple hours, and then being rescued by my roommate, (shout out to Deborah O'Carrol!) I finally did get some sleep.

Thursday was a blur of  new connections, and trying to find one's feet among a busy throng of 400; which was challenging for the introvert in me! I tried the old "fake it till you make it!" adage, and met lots of new folks.
It was a relief to see just how many of them I had already friended on-line, which helped ease the panic mode quite a bit. All that hanging out on FB paid off! 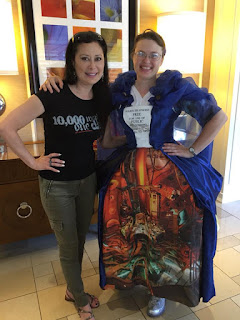 Friday was a "crash day" for me, I stayed up til after midnight prior, and slept till nearly noon. Sort of my reward for being brave all of Thursday and pushing myself! I nearly overslept and missed my slot to help out at the greeting tables, but when I got there (15 minutes late! Ack!) they put me with the T-shirts, which were in disarray. It was actually re-juvenating to sort the remaining stack and organize by what sizes were left, and I was able to help several people find their size when those sizes were thought to be out.
So that was validating for me! I love to help people not be disappointed, and bringing order to outer chaos tends to calm my own inner kind.

Chatting quietly with the other volunteers was great too, because it was such a low pressure situation and very one-on-one. I find I actually don't know how to "not have a job" well!
As Tosca Lee was leaving, she actually asked for a pic with my Tardis dress, which I was thrilled to comply with. I was much too inhibited to ask for a pic with her, but I was sort of desperately wanting one, since I don't hob-nob with NYT bestselling authors a lot! So that was definitely a highlight.  (My Tardis dress was my most popular costume, and "broke a lot of ice" for me, so that was worth all the trouble it took!!!)
Listened in on some of the big speakers during the afternoon, then got to bed and had a good rest before Saturday. 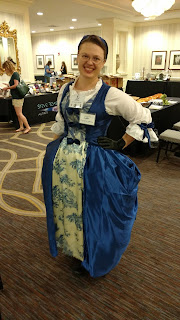 Saturday was when I'd lined up all my pitch sessions and mentor appointments, so I knew it would be a stressful day. But by making big strides to meet everyone on Thurs, and then taking it easy on Friday, I was rested and familiar with my surroundings, and so didn't feel too nervous about things all Saturday. Met some new folks there as well, and felt it was a very successful day overall!

I wore my "Little Bo Peep in blue" /or/ "18th century shepherdess". Had to explain it to a lot of people, so it was clearly not as iconic as  the Tardis dress. (But it's still one of my favorites!) Didn't get as many picture/selfie requests with it, either, had to ask someone to take a pic, so I had one! ;-)
(My own camera had promptly died upon arriving, even though I'd put fresh batteries in before leaving home... so I only had my gift-kindle as a photo device, and it was slightly hard to selfie well with.)

Sunday was wrap up and I was disappointed to see so many people heading out. It felt like I'd just started getting to know a lot of them!  Got some time to chat with folks who hadn't left yet, and spent another lazy day with a lot of conversing, which was great to catch up on. 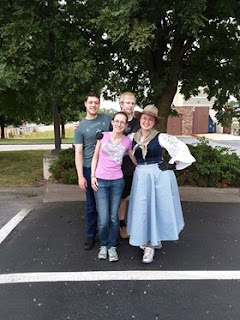 A big storm hit at home, and the following morning, Monday, the TV news showed the "duck boat drowning" near Branson, results of that unusually violent wind. Mary, who'd worked in Branson, was shocked by the news, and had met several of the local authorities who appeared and gave statements.
Then we all loaded up and headed out, and it was a gray, cloud spotted day, which was nice for traveling. Mary got us to Springfield around noon, where my ride met me. We got a final pic of the 'troop', which Mary regretted not getting when we started out!

But alls well that ends well, and I was really glad to get snuggled in my own bed again. (Although I had taken my pillow with me, to help ease sleeping in strange places, there's just nothing like my own bed!)

At the end of the conference it was announced that Realm Makers will be in St. Louis again next year... so tell me, are you going to be there? :-) Let me know!

It was such a delight meeting you! And all your costumes were utterly breathtaking!

I'm reeeeally hoping to get to go again next year. There's no guarantee, but I'm certainly going to try! Do you think you'll be making it?

Thansk, Christine!!! Meeting you was a great treat, I had no idea you were going to be there!
And I LOVED your costume, it was sooo adorable!!!
The small fact that we'd each used the same 'time clock' buttons in our outfits was just so much fun!

Mary says they'll go again, and intimated that I'll be welcome to tag along... so unless I make her really mad, looks like that'll be an option! ;-)

It'd be great to see you again! Until then, it's fun to be able to keep in touch with everyone online here! :-)