I can hardly believe it... it just seems to mind-boggling that this ol' world could have hung in there for
so long , already, since I was a wee tot!!

(I recall learning to write the date back in the 1990's, and thinking how utterly weird it would be to have to put any other two numerals at the front... and now here we are, and I have to learn to put not just a 2 and a ), but then a another 2 as well, for a full three spaces of "twilight zone, the future is NOW" feel to things!


And yet, the Real World feels awfully un-future-like... the little birds are chattering like crazy outside the window right this minute, even though it is winter...

And I can hear the low thrum of the tractor as the cows are fed their hay...

And I was informed just now that another two baby goats have been added to the herd... just as they have been born for ages, and for every year since the 90's when we started having goats to be born.


It just feels so... anti-climactic, ya know?

Like, forget the fact that hover-boards are not nearly as prevalent as the "Back to the Future" movies would have one believe... but also the discordant unrest in the world at large just seems to get worse and worse, and yet...

Birds are still twittering. Babies are still being born. The cows still need feeding... and so What Is Happening?

I tend to think the future is not Now. 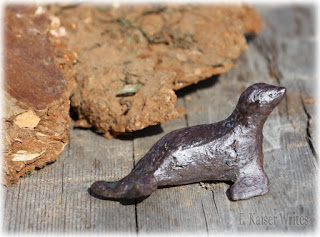 But my saddened heart desperately hopes that True Peace will come as soon as possible, because until that happens it just feels like people will continue to grow more and more destructive and self-attacking, both within and without, and its just super depressing.

So until then... I guess I'll try to concentrate on the good things which continue to go right, in spite of all the "big bad world out there" goings on.

Hope you all are finding refuge in good places, as well!!

I understand what you're saying! And yes, I do try to focus on the "good things which continue to go right, in spite of all the 'big bad world out there' goings on." That smaller perspective keeps me sane and grateful. :)

BTW, that metal seal is fascinating! It seems like there must be a story behind it. ;)

Thanks for chiming in, Kelsey!! :-) Sanity is important to preserve. ;-)


As for the seal... it's actually clay! I made it out of the clay dug here on the farm, which is also behind it in the picture there.
We surmise it must be really high in iron, which gives the red color when straight out of the ground, but it turns Black once fired, and that sort of "ages" into a purple-y metallic gray... which is super interesting!

I'd love to do some more experiments with the local clay here, once some of the other projects are finally completed. :-)